So honored that I was chosen as the Agnes Meyer Teacher of the Year from Loudoun County, Virginia for 2014!

Posted by Allison Alison at 3:31 PM No comments:

My open letter to Governor Chris Christie was published in the Washington Post today.

Here is a link to the article:

Here is the actual text of the letter:

Parenting At Our Best - New Video

Posted by Allison Alison at 4:07 AM No comments:

Recently a film team from the Loudoun County Public School system did a feature on me and my book. It was a great experience working with the team from LCPS that created this:

Are Violent Video Games Addictive and What Should Parents Do About It?

The issue of the effects of violent video games on children is a hot topic especially in lieu of the Sandy Hook shooting and many other violent crimes. Katie Couric dedicated an entire show to the topic and introduced people who had been gravelly affected by them and her guests felt strongly that video games were addictive and dangerous in the wrong hands. What are parents to do? There is no question that these games have a huge appeal on the male population and even some females. But are they safe for children? And can they become addictive and lead to a child committing unthinkable violence?

When I interviewed the parents of successful children for my book, they kept repeating the same message over and over again. Parents must limit “screen” time. They were not just referring to video games but also any electronic device such as television, computers, phones, and ipads that require a screen. They felt children today spent way too much time on these devices and they needed to be outside playing more. What happened to the days where children spent hours outside with friends with nothing more than a discarded box or tire coming up with creative ways to use it? I can remember playing with a big appliance box that had been delivered to our house for hours. Do children today even know how to just go out and play in the yard with no set agenda or activity in mind? I can remember doing some creative and fun things with just sticks, rocks and string.

But the question still arises should children be playing these games at all and what are the effects on them? According to the American Psychological Association, violent video games can increase children's aggression. I was curious about this issue since as a parent I had allowed my own son to play these games. He wasn’t allowed to play them until he was around thirteen and his screen time was limited. Fortunately for me, my son liked to play sports video games and be outside playing sports more than playing violent video games.

I brought this topic up in my government class last spring and l learned a lot from the males in the room. This was a senior class so most of them were already eighteen. The question came up in the government class whether the government should regulate violent video games. I remember it was a heated topic and we had a really good discussion but what I learned from them was that most, if not the majority of the students felt it was not the government’s job to regulate the violent games but the parents’ job. They really did believe that parents were the ones who needed to supervise such use and make sure their child was able to psychologically handle the violence and understand it. They also felt it was up to the parents to limit such activities.

I asked them the question whether they believed violent video games could be addictive. Most of them felt anything done in excess could become addictive. But to my surprise I actually had several males bravely speak out and say that they had become addictive to these violent games and that they were the proof it was possible. We had an interesting and enlightening discussion on the topic and I learned a lot.

At the end of class, I spoke with a couple of the young men a little longer about their experience. I felt like I had been given this gift to really ask them why they thought they were addicted and how they turned things around. The message that came across clearly to me was that all of them reported becoming addicted to the games around middle school and the beginning of high school. Those are the critical years and must be watched closely. They said they knew it was bad when their friends would ask them to hang out and do something and they just could not go. They knew they should go hang with their friend but they just could not leave the game. They were too into it. When their parents tried to limit their use, they admitted to becoming belligerent and disrespectful to their parents. They just weren’t the same person as before. They eventually realized on their own it was not healthy and learned to limit the games.

I asked them what advice they would give a parent of middle school age who seemed addicted. They were adamant that taking the games away “cold turkey” was not a good idea. They said like any addict this is just too hard. Also they said their child would find a way to play even if they had to lie and sneak around to do it. Teach them how to limit the exposure and talk to them about the effects. They may even need counseling. They felt that parents should know their child and whether they had the mental capacity to handle such games. If they were concerned about their child’s mental state, they really should not be playing them at all.

So are violent video games addictive? It would seem there are many reliable sources to say they can be. It seems it is up to us as parents to monitor such activities and teach responsible use just like with a gun or any other dangerous activity. When I think of the tragedy at Sandy Hook, my heart goes out to the parents and families that lost those beautiful children and brave staff members. I cannot imagine a pain as a parent worse then what they are experiencing. We all need to take responsibility, as parents to teach our children to be good law abiding citizens and talk about the reality of violent video games. We can start by limiting screen time and having real discussions about the true nature of the violence in those games with our children. And maybe, one day, just give them a big old discarded box and send them outside to play.

What do you think?  Please let me know in the comments below.
Posted by Allison Alison at 4:17 AM 2 comments:

Really Listening to Your Children Makes them Feel Valued

Posted by Allison Alison at 4:16 AM No comments:

Today, I learned about a new of group of teachers called BAT (Badass Teacher Association). They are tired of being blamed for all the problems in public education.   I understand their frustration. I believe there are three key groups who contribute to the success of schools and students.

Parents
Parents who are engaged in their children's lives.

Teachers
Teachers who bring out the best in their students.

Community
Communities that make sure the school is safe and provides services.

As parents, we far too much responsibility and blame on teachers, but the reality is it requires all three of these groups to have a successful child and school system.
Posted by Allison Alison at 5:12 AM No comments:

Allison Alison
Allison Merkle Alison graduated from Pepperdine Law School in California and worked as an attorney in the Los Angeles Public Defender’s Office, then as an attorney representing children in the Child Abuse and Neglect Court in Los Angeles.

She moved back to Virginia, where she had been raised, and represented children in the Loudoun County Court System. She went on to get her Masters Degree in Education from Marymount University and has taught in the Loudoun County Public School District since 2001 as a high school teacher. She has worked with children in many capacities for over two decades. She lives in Northern Virginia with her husband and three children.

Parenting at Our Best

My book is available from Balboa Press. 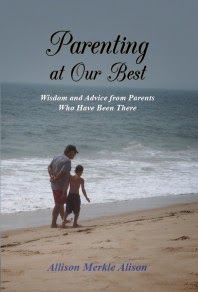